You are here: Home / Seminar 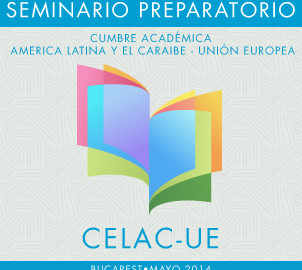 In January 2013 the first CELAC – EU Academic Summit was held in Santiago de Chile, which brought together academics and representatives of universities, higher education institutions and scientific networks from both regions, a few days before the CELAC – EU Summit of Heads of State and Government.

The Summit had outstanding results, among which the most important are the ones regarding the intention to promote a Euro – Latin American higher education, science, technology and innovation common space, to create a Latin America and Caribbean – European Union Permanent Academic Forum, to strengthen the integration of higher education, scientific research and innovation systems and promote collaboration between higher education institutions and their relations with society and the production sector. The main debates and proposals, but also the content of the Santiago Declaration can be found at the official site of the Summit.

The Summit ‘s success was due in part to the excellent preparation during the preparatory seminars in Paris (June 2012) and Lima (October 2012). Indeed, one of the most important elements of the Declaration, the creation of a Permanent Academic Forum was an initiative presented in Lima.

Therefore, we recognize the substantial importance of the preparatory meetings and hope that the goals established in the Preparatory Seminar of Bucharest (May 2014) may open new perspectives for discussions within the Second Academic Summit in 2015.